Your dog has a natural instinct of wanting to dig into trashcans without your knowledge. While at it, they might eat some leftover food or expired meat. So you ask yourself can dogs eat rotten meat? Can they get food poison and how what can I do about it.

In this guide can dogs eat rotten meat we will address this question and much more. 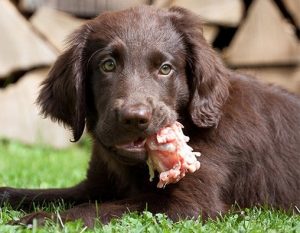 Simply stated no, they can’t. Although their stomachs are highly acidic, your dog can still get food poisoning.

When the meat is spoiled past the point where you can’t consume it, your four-legged buddy shouldn’t either.

How To Tell If Meat Is Rotten (6Tips)

Meat spoils when it’s stored for too long or treated at improper temperatures, causing mold or bacteria to infiltrate. While unpleasant odor may be the first sign of spoiled meat, it’s not the only thing you should rely on.

You may want to examine the color and texture of your meat, among other things.

Can Dogs Tell If Meat Is Rotten?

Dogs have a strong sense of smell and will pick up odors that humans simply can not. They have approximately 125 million sensory cells in their noses, as opposed to 5 to 10 million for humans.

As a result, dogs can tell by the smell of food if it’s spoiled or not.

Next time you see your dog sniffs the bowl and turns their head and walk away, know there is something wrong with the food.

However, when they can’t tell if the meat is spoiled or not, they’ll eat it, but later throw it up if it’s rancid.

Can Dogs Get Food Poisoning From Rotten Meat?

The first thing you might be asking yourself is how dogs could get food poisoning from eating old meat? They were once wild animals that use to hunt and eat whatever they could find.

Well, dogs have experienced thousands of years of evolution, and their digestive system is designed to handle not so fresh foods.

Dogs have an acidic stomach that makes it difficult for bacteria to survive. Also, their digestive system is short, which means it only takes a few hours to eliminate waste.

This doesn’t give bacteria in the stomach time to flourish.

However, even with such a tough digestive system, dogs can still get food poisoning. Some bacteria can be persistent and even survive in a harsh environment.

Therefore, allowing your dog to feed on spoiled meat exposes your pet to food poisoning. Although food poisoning is not as common as it is in humans, it can be disastrous if your dog gets it.

Therefore, if your dog happens to eat rotten meat by accident, be sure to contact your veterinarian as soon as your dog starts to show signs of illness.

What Are 9 Signs Of Food Poisoning In Dogs?

Food poisoning can take on many appearances with distant clinical symptoms, but it typically results in:

These symptoms can manifest a few hours after feeding unspoiled meat. In most cases, food poisoning is often mild and passes fairly quickly, enabling your dog to resume normalcy.

How To Address Food Poisoning In Dogs (Fast)

In case you suspect your dog is suffering from food poisoning, try fasting your pet for 24 hours. When they start vomiting, only offer them water, and their system will clear the toxins.

Water helps hydrate your dog as its body attempts to purge the bacteria. If the problem persists, it’s best you take the dog to a vet for close examination to avoid severe cases such as Botulism.

Botulism is a deadly illness that causes paralysis in dogs. Your dog can acquire Botulism by ingesting toxins (a poisonous substance) produced by bacteria, Clostridium botulinum. These bacteria multiply rapidly on decomposing animals or contaminated raw meat.

The toxin will affect the nervous system of your dog, causing a variety of symptoms.

These signs will manifest in 12-36 hours after your dog has been exposed to the bacteria. Instant death may happen due to the paralysis of the lungs or heart.

How To Treat Botulism

If your dog is showing symptoms of Botulism, it’s necessary that it receives respiratory therapy, intravenous fluids (IV fluids), and nursing care.

Typically, treatment of Botulism is focused on providing supportive care. For a mild case, your dog may be hospitalized and treated with ‘IV fluids’ to replenish lost fluids.

But if the case is severe, the vet may recommend placing your dog under the intensive care unit, where it’ll be monitored closely.

The treatment and recovery period from Botulism varies between one to three weeks.

If your dog has consumed contaminated meat and has not yet shown Botulism signs, an antitoxin can be administered.

The antitoxin works by stopping the Botulinum toxin from binding to nerve endings and causing clinical symptoms.

Food poisoning in dogs is real and as an owner, it is your responsibility to monitor what they eat. In order to protect your furry friend, always keep rotten meat stowed securely.

Make sure your dog only feeds on fresh meat that’s well prepared and fully cooked. Moreover, dog-proof your trashcan and avoid leaving it unsupervised for long.