Ok, follow me here. You hear your best friend constantly barking for hours and hours in the back yard and you think no big deal. After a while, you check on him and his voice is raspier than a normal bark. Now you start to wonder can dogs lose their voice?

In this article, I am going to explain some reasons why your dog may lose their voice and should you be concerned. 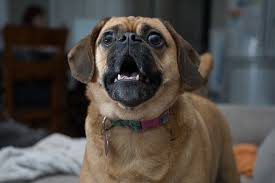 How Do Dogs Make The Barking Sound?

Similar to humans, dogs have their larynx made up of cartilages, muscles, vocal cords, nerves, and other tissues. The process of voice production, barking, in this case, is staged at the vocal cords.

The dog’s vocal cords can effortlessly get opened and closed, tensed and held together closely via the use of ligaments and muscles. When the dog breathes out, air flows through the vocal cords, causing them to vibrate.

Movement of the tongue might also determine the sound produced.

It is also important to note that different breeds of dogs have various sizes of vocal cords. Longer vocal cords normally lower and deepens the barking sound.

This is noticeable mostly in the German shepherd breed. On the other hand, shorter vocal cords produce louder barking sounds, as evident in the indigenous African species.

In a bid to react to different environmental situations, various breeds of dogs make different barking sounds. With the most common barking sound being ‘woof-woof,’ the procedure of voice production is similar to humans.

Blatantly, the organ involved in the production of voices is the larynx, aptly known as the voice box. This organ is connected to the respiratory system to create airways.

It also prevents food from going down the airways.

3 Strong Indicators Your Dog Has Lost Its Voice

Firstly, dogs facing difficulty in breathing may be subject to voice loss. A drastic change in the breathing impulse of a dog is one of the indications. Dogs may develop difficulties breathing, making the respiratory activities strenuous, therefore affecting its barking activities.

Secondly, while feeding a dog, loss of appetite is another symptom that your pup has lost its voice. It is typical for dogs to exhibit good feeding habits. Rapid fluctuation in the appetite could result from a sore throat, making swallowing difficult.

Lastly, when a dog produces a weaker sound than usual, it might be on the verge of voice loss. Active dogs make clear barking sounds in response to either their master or intruders. A dog’s voice loss could be in the offing if its barking is weaker than usual.

Additional Reading:
Why Do Dogs Like Mud -Yuck! (And How To Stop It)
Why Do Dogs Bark at Nothing? (Or Is It Something?)

Voice Loss In A Dog (8 Reasons)

All these signs that get observed in dogs depicting voice loss are due to some biological causes. Different biological conditions may get the voice of a dog out of shape. Some of the conditions that may warrant your companion buddy to lose its voice include;

The larynx (voice box), the organ responsible for producing sound, contains the laryngeal muscles. These muscles ensure sustained stability of the voice box.

When the nerves of these muscles weaken or paralyze, they relax, resulting in laryngeal paralysis. The formation of a tumor in the larynx airway is one of the core causes of this condition.

This condition can then subject a dog to a dreadful voice loss.

This is a biological disorder which is also known as aryepiglottic collapse. The structural rigidness of the voice box’s cartilages is vital for the production of flawless voices in a dog.

A sign of weakness of the cartilages can lead to its collapse, which causes voice loss. This is common in dogs that are two years and older though not all.

Also known as canine cough or K9 cough, it also plays a part in causing voice loss in dogs. It can occur in both adult dogs and puppies.

It is brought about by a bacterium called Bordetella bronchiseptica. After exposure to dusty areas or cigarette smoke, dogs tend to produce a sound as if they are getting choked.

The kennel cough respiratory infection also can be transmitted to other dogs from an infected one since it’s airborne in nature. When the condition becomes chronic, it might lead to the loss of a dog’s voice.

This is an indication of obstructed airways in dogs. The airways are vital during voice formation in the voice box.

Dogs get choked by different things as they try to swallow, for example, fish bones and other food chunks. This then leads to blockage of their airways, which brings about the difficulty in voice formation.

The persistence of this activity would then lead the dog to lose its voice.

Some dogs engage themselves in too much barking as a result of maybe anxiety, danger, or anger. Dogs may do this also because of territory protection after realizing the approach by an intruder.

The pup can also get aggressive barking due to the desire to seek attention from the owners. When this is overdone, it will lead to a weakened voice box, thus failure of voice production.

When the voice box muscles weaken, the degree at which voices are produced changes to a notably reduced level.

Exposure to low temperatures, mostly in the kennels, subjects the dogs to voice loss. This makes dogs develop runny or congested noses and sore throats, which affect the larynx.

By this, the larynx might get blocked with heavy mucus and then lead to voice loss. Any dog can catch a cold, and therefore, all dogs are susceptible to voice loss.

Other conditions that may cause your canine to lose their voices include autoimmune responses. By this, the dog’s immune system mounts an immune response to its cells.

This hyperactive cell attack happens when lymphocytes perceive their cells as foreign, hence launching an attack. When such happens, the nerve cells supplying to the larynx get damaged, thus losing voice.

Also, hypothyroidism or muscle disorders are a common cause of loss of function of the vocal cords. However, these conditions can be dealt with early to protect the dog from voice loss or impairment.

You can do this by visiting a vet or a dog handling specialist. Prevention measures might also be put on course to curb the dogs’ susceptibility to voice loss.

If you suspect a more serious problem, then seek out your veterinarian for advice or medical attention.

1 Response to "Can Dogs Lose Their Voice? (Like You And Me)"