Drinking tea is a delicious refreshment that people all over the world love and savor.  Whether it’s iced tea, green tea, or my wife’s favorite sweet tea, at some point will ask yourself if tea is bad for your dog?

Can I share this seemingly harmless drink with my best friend? 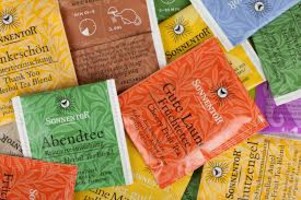 History And Composition Of Tea

Tea is a beverage that’s prepared by pouring boiling water over Camellia Sinensis, a herb native to East Asia, leaves.

It’s the second most-consumed drink after water worldwide. There are different types of teas which have different flavor and profiles.

Initially, tea was used as a medicinal drink by various ethnic groups in Southeast China and Northeast India.

However, during the Chinese Tang Dynasty, it was used as a recreational drink which contributed to its popularity in East Asian Communities.

It became a popular drink among the English in the 17th century who planted it on large scale in India.

Tea has both suspension and solution properties. It’s a solution of soluble compounds like amino acids that have been extracted from the tea and a suspension when considering insoluble components like tea leaves’ cellulose.

Tea contains caffeine that gives humans a stimulating effect. Caffeine makes a total of 3% of the weight of dried tea.

Other components include theophylline and theobromine that are also stimulants. Some teas, especially those made from old stems and leaves contain high levels of fluoride which can be a health risk if one drinks too much.

Tea also contains Polyphenols such as flavonoids whose composition is 30-40%. Now that we know where tea came from and its compounds, let’s talk about whether it’s safe for your dog to drink it.

Is Tea Bad For Dogs?

Tea has several health benefits for humans. So many dog owners often wonder whether they can share this beverage with their furry friends.

Well, allowing your dog to drink tea won’t have any serious issue for them. Tea is an important addition to dogs, especially those with enteritis or hepatitis.

Teas contain many antioxidants that protect your pet from diseases. Plus, they can protect their liver and intestinal tract from inflammation.

Teas with dandelions or nettles help balance electrolytes hence your pet can go for long hikes. Also, tea made from peppermint leaves has antibiotic properties that can help with your dog’s bad breath.

However, tea contains caffeine, which can pose some risks to your pet. Unlike humans, dogs tolerate only a small level of caffeine.

It’s why you should always opt for decaffeinated tea types. Additionally, dogs can react to certain herbs like Echinacea if he’s on certain medications.

Also, be mindful of how much tea your pet drinks. Experts recommend a cup a day along with other dog meals. Dog owners are also advised not to give tea to their pets with an empty stomach. 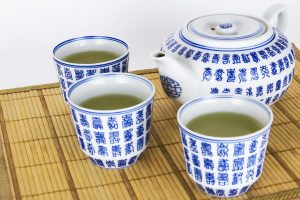 Is Green Tea Good For Dogs?

Green tea comes from the leaves of Camellia sinensis that come from East Asia. It’s purely safe for dogs as long as it’s decaffeinated.

When consumed regularly, it can improve one’s health. As it contains antioxidants, it can help prevent some cancers. It can also kill bacteria and lower the risk of infection as well as other diseases.

These benefits can help improve the overall health of your dogs. However, avoid leaving green tea, tea bags, hanging in the cup as your dog can choke on them.

Pets are sensitive to caffeine. Even in moderate amounts, they can be very dangerous to consume. Signs of caffeine poisoning can appear within 1-2 hours of consumption.

In severe cases, your dog might collapse or experience seizures, which can cause poor prognosis.

If the heartbeat is irregular or rapid, he may die. Immediately take your pet to an emergency vet if he’s showing these signs. We advise that you keep your tea bags and coffee beans locked at all times.

Can Dogs Drink Tea For A Cough?

Herbal teas can help soothe your dog’s throat when they have a cough. You can combine a tablespoon of dried herbs like peppermint or licorice root with 2 cups of cold water.

Boil the mixture, remove it from heat to let it cool and give your dog two tablespoons of this tea before meals.

Can Dogs Drink Tea For An Upset Stomach?

Herbal teas also have a soothing effect that cures an upset stomach. Chamomile tea, for instance, is sedative to the stomach.

It helps prevent diarrhea while regulating gas and vomiting. Dogs that often suffer from a nervous belly can drink chamomile tea before or during an active event to calm their gurgling stomachs.

Start with 1ml per 30 lbs of the weight of your dog and give him every two hours until the digestive issues reduce.

You can also give him ginger tea as it’s also soothing to the stomach and can help control vomiting. But give him in small doses to avoid worsening the symptoms.

Can Dogs Have Jicama? (What You Need To Know)
Can Dogs Lose Their Voice? (Like You And Me)

I can recommend giving your best friend tea if it is decaffeinated. But you need to stay away from sweetened tea and any caffeinated tea.

Also, be mindful of how much you offer and how many times a day. Remember, less than a cup per offering and only once a day.  Of course, I always recommend you check with your veterinarian before introducing a new drink and for additional advice.

17 replies to "Is Tea Bad For Dogs? + Other Tea Questions Answered"