Tuna fish, scientifically known as Thunnini belong to the family Scombridae and is considered a saltwater fish.

Tuna has a good content of proteins, fat, cholesterol, sodium, mercury, and vitamins. But carbohydrates and fiber content are zero.

It is rich in essential amino acids especially omega 3 fatty acids, and essential for human body growth and maintenance and strengthening the lean muscles.

As your dog is considered to be one of the most important members of your family, you would surely like to provide them a more fun, healthy lifestyle and food options. So, is tuna fish good for dogs?

Let’s explore and find out. 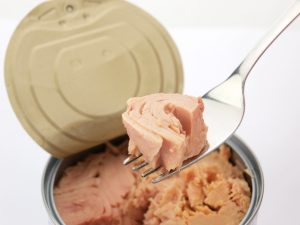 Is Tuna Fish Good For Dogs?

There is controversy about the safety of tuna fish for dogs, and for some veterinarians suggesting that tuna is safe while others think tuna is harmful.

Included in commercial dog food preparations, tuna is considered good, especially for those that have upset or sensitive stomachs and can’t consume poultry proteins to a better extent.

Therefore, the protein content of tuna can be beneficial for dogs with stomach issues, by providing them their basic nutritional requirements.

So, in a safe range, tuna is good for dogs.

Is Tuna Fish Bad For Your Dog?

Despite its benefits, tuna is also bad for dogs if given in excess, because of the mercury levels present..

But researchers have also have noted mercury levels in tuna’s commercial preparations are not too high to be considered toxic.

Thus, no such cases of mercury poisoning for commercial preparation of tuna are reported so far. Again, it can be a problem if tuna is fed to dogs in excess amount.

Just know it’s better to limit the amount of tuna fish so that your dog may stay within a safe range.

Secondly, some dogs are intolerant or show some allergic reactions to tuna fish, so there is a possibility that your dog may not enjoy tuna.

Canned tuna is prepared by packing it immersed in oil or water. But the question arises that can a dog eat tuna in oil or water? Or tuna is safe for dogs or not?

So, apart from lengthy debates, the answer is always yes! But inappropriate proportion!

Canned tuna usually does not contain larger tuna fish but rather skipjack or albacore. This can be proved as a healthier protein-rich diet for your dog.

As far as the water and oil form of canned tuna is concerned, some owners prefer the water. However, it should be noted that water doesn’t have any added salt.

As, tuna is a saltwater animal, so there’s a possibility that its canned preparation may contain saltwater, so, be careful about choosing canned tuna preparation.

Dogs cannot eat raw tuna, as it is not a safe choice for them. Raw tuna contains several bacteria and harmful parasites that may be proved to be damaging for dogs.

There’s an excellent example of freshwater salmon that may cause salmon poisoning as it carries some harmful bacteria that cause serious infections in dogs.

Salmon poisoning can be proved to be fatal if not treated in a timely fashion.

So it is advisable to use cooked tuna, as sufficient heating destroys bacteria as well as thiaminase enzyme, both of which are harmful.

Best Method To Feed Tuna To Your Dog

If you want to feed your dog tuna, then keep the following in your mind.

While buying canned tuna, look for water-based tuna canes with no additional salts or preservatives. Try to avoid feeding water or oil from the cans.

There’s a possibility for tuna flakes to be stuck between your dog’s teeth. You can avoid this by adding dry biscuits which will absorb any water.

For prevention of mercury poisoning, try to feed either albacore or skipjack tuna.

To get rid of excess salts, try to steep tuna in freshwater for a day or at least overnight.

What Are The Different Nutritional Facts About Tuna?

All benefits associated with tuna are considered to be so due to the copious number of different vitamins, minerals, and other nutrients found in it.

Also, several antioxidants and fat-free proteins are present, which make tuna the best diet to be consumed easily. Sodium levels are also much lower making it to be tolerated better.

Several other minerals such as selenium, iron, magnesium, phosphorus, and potassium are also found in tuna.

About vitamins, there is marked content of vitamins, especially vitamin B12, B6, niacin, vitamin D, and riboflavin. Apart from all this, omega 3 fatty acids are present in big amounts.

Tuna is proved to very nutritious as it is full of a variety of vitamins, minerals, proteins, and saturated fats, hence considered as beneficial for health.

Antioxidants present in tuna will help clear out free radicals that are harmful to the body. The best nutritional factor, protein, is found abundantly in tuna, so it is a fat-free protein-rich diet.

As saturated fat levels of tuna are very low, so it is healthy for even dogs with cardiovascular issues.

Also, Sodium levels in tuna are low to such an extent that every dog can tolerate it better.

Tuna is rich in a variety of vitamins such as Vitamin D, Niacin, vitamin B6, Cobalamin, and riboflavin, which are important for normal metabolism as well as important factors for maturation and differentiation of cells especially blood cells.

Minerals such as iron, magnesium, potassium, iodine, and phosphorus, are found abundantly in tuna. Also, selenium is present that binds to mercury and helps cells to be protected from mercury poisoning.

The presence of Omega-3 fatty acids made tuna healthier, as it helps to lower the levels of other fatty acids especially omega-6, and also lowers blood cholesterol levels, hence it is best for the reduction of risk of coronary heart disease.

How Tuna Is Harmful To Dogs?

High levels of mercury present in tuna, may lead to a lethal condition known as mercury poisoning in your dog.

The larger and older the fish, the higher the levels of mercury. Because mercury levels are associated with spillage from industrial waste products into water sources, mercury gets absorbed into tuna hence making it harmful.

Secondly, the thiaminase enzyme that is present in tuna causes inactivation and degradation. Hence, therefore, can deplete thiamine stores and cause neuronal damage that can be permanent if not treated immediately. The take away is to avoid raw tuna.

9 Signs If Your Dog Has Mercury Poisoning From Tuna

There are various symptoms of mercury poisoning due to tuna. Here is the list:

If your dog is developing these symptoms after eating tuna,  you need to make an emergency trip to your veterinarian for treatment.  This scenario is life-threatening and needs to be taken seriously.

Additional Reading:
Is Pepperoni Bad For Dogs? ( A Complete Guide)
When Can A Puppy Drink Water? (Weaning Timeframe)

Tuna is a saltwater fish, rich in vitamins, proteins, and minerals. Fat contents are very low and those present are rich in omega-3 fatty acids that contain benefits in lowering blood cholesterol.

Dogs can eat tuna in a limited amount keeping in mind excess should be strictly prohibited as it can cause serious adverse effects.

High levels of mercury can lead to mercury poisoning and serious problems.

Also, consumption of raw tuna is lethal due to the presence of bacteria, parasites, and thiaminase enzyme. Although, sufficient cooking can wash away these hazards.

Canned tuna is good to consume but look for additional salts and preservatives, as these are harmful rather than beneficial.

Just be careful about the amount of tuna given to your pet and monitor the reactions.