Stink bugs or Pentatomidae are shield-shaped brown pests, annoying due to their unpleasant smell. These bugs can gain access to your house through any opening or crack and reside in walls and once they enter.

Mostly, they gain access to a home during the winter season, as they seek out warmer temperatures for their survival. But fortunately, they are not harmful from a bite or spread of any disease.

Many pets domestic pets yes even dogs love to eat stink bugs. As dog lovers, we naturally get concerned or worry and ask ourselves are stink bugs poisonous to dogs?

In this ultimate guide, we shall answer this question.  Let’s go! 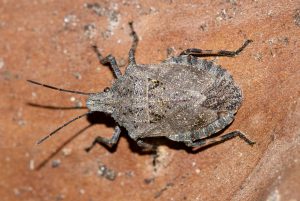 Are Stink Bugs Poisonous To Dogs?

If your dog loves to chase stink bugs and enjoys eating them, and you are worried about your pet that may be stink bugs are poisonous for them, so here is good news for you.

You need not worry about your dogs, as stink bugs are not poisonous for dogs. There can be mild symptoms of gastrointestinal irritation such as vomiting or dribbling of saliva from the mouth.

These symptoms usually resolve spontaneously and no medical aid is required.

Why Do Dogs Love To Eat Stink Bugs?

Dogs love to chase and catch flying or crawling mini creatures like cricket, stink bugs, termites, flies, etc. Therefore, after so much struggle and curiosity, they love to eat these creatures.

Also, none of these bugs are toxic for dogs as no prominent disease is caused by them. So, dogs can love to eat stink bugs out of any danger.

What Are The Effects Of Stink Bugs On Dogs?

As stink bugs are not poisonous for dogs, the only side effect is increased secretions. Therefore, consequences of the ingested bugs can either be revealed immediately or these may appear over time.

The consequences for dogs that ingest them, may cause gastrointestinal irritation that usually results in vomiting but usually resolve spontaneously within 8-12 hours.

The secretions of insects are irritants that may induce lacrimation in dogs. Also, these can induce pain and a typical urticating’s sensation may be produced. Irritant action on the tongue, gums, and lips, can lead to excessive salivation.

If insecticides have been used, there may be impacted pesticides on stink bugs that prove to be toxic for dogs if they ingest them.

If your dog has ingested an enormous number of insects, the cumulative product of which forms a hardened mass known as a bezoar, particularly in the stomach of the dog.

So that this cannot be passed further to the intestines and the protective shells of the pest cannot be digested, so surgical treatment is the last option left for the removal of bezoar.

So, whenever you think that your dog has ingested a huge number of stink bugs, then you should get a consultation with a veterinarian.

If your dog eats a stink bug, then you will be glad to know that stink bugs do not cause any allergic reaction after being eaten.

Although different secretions are produced by stimulation of products of stink bugs these are not poisonous and can only produce irritant action.

When To Worry If Your Dog Eats Stink Bugs?

As dogs love to eat stink bugs and there’s a possibility that your dog eats stink bugs. These are not toxic to your dog. But the unpleasant taste can cause dribbling of saliva and vomiting.

So whenever they eat stink bugs, carefully notice these symptoms. The symptoms usually resolve spontaneously, but if not resolved even after 8-12 hours, then you should bring him to the nearest vet, and further consultation, check-up, and investigations may be helpful in the formulation of the treatment plan.

Additional Reading:
How To Keep A Dog Cool Inside The House -15 Helpful Tips
Can Dogs Have A Ginger Snap? (Pros and Cons)

The indigestible shells of stink bugs may precipitate in the stomach to form a bezoar that is not further digested and can only be removed by surgical procedures.

So, if you find that after eating stink bugs the symptoms don’t resolve even after 8-12 hours, then consult a veterinarian.